A combination of GEOlight® attenuation tanks and Weholite manholes provides protection against surface water flooding and pollution to a 244-acre residential development.

‘Wren’s Nest’ is a 27-acre, third construction phase of the ‘Edlogan Wharf’ development, which lies within the Afon Lwyd valley in the borough of Torfaen. It is one of eight parcels of land in a 244-acre development which will take an estimated 10 to 12 years to construct and, upon completion, will comprise 1200 homes, a village green, sports pitches and play areas, cycle and leisure trails, allotments and extensive areas of green space including woodland and conservation grassland.

SDS was required to deliver a drainage system that ensures the site remains flood risk free, and to create new habitats for nature conservation, whilst still retaining the six existing streams and canal which traverse the site. 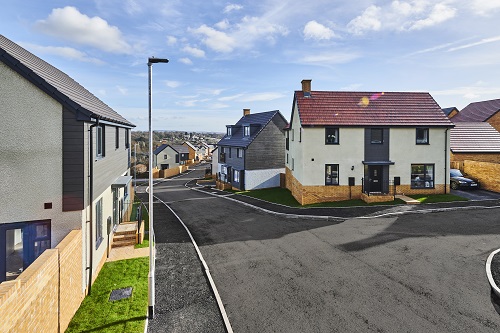 Multiple GEOlight® storage tanks, totalling in excess of 8,000m3 capacity, have been installed over the past five years. In the most recent phase of construction, excess surface water is captured by two GEOlight® tanks, together capable of storing over half a million litres, which can be accessed by three 1.5 metre diameter Weholite HDPE manholes, positioned at each end, and in the centre, of the two attenuation tanks.

Whilst pre-existing streams and canal habitats have been retained, the construction of new balancing ponds and swales provides additional attenuation features, whose natural bio-cleaning mechanisms are expected to break down any hydrocarbon pollutants.

A survey of the site’s geology revealed that the scope for natural infiltration of surface water was limited. Investigations also indicated a requirement for mitigation measures on some of the streams, without which several of the development areas would be at risk of significant sewer flooding from extreme rainfall events. Consequently construction of the drainage system was carried out early in the build programme in order to quickly counter this risk.

The catchment is relatively urbanised and receives approximately 1,150 mm of rainfall per year; it responds quickly to rainfall due to its steep, impermeable upper reaches and moderate urban area.

Surface water runoff is either discharged into the Canal or carried by one of the on-site streams to finally discharge into the main rivers of either the Afon Lwyd or the Blaen Bran.

The SuDS system ensures that, despite the redevelopment of the former grass and woodland to impermeable areas, the hydrological status quo is retained. This means that the rate and volume of surface water runoff leaving the development should be no greater, and its quality no poorer, than before the new development occurred.

We have been working with SDS on this project for a number of years now and will continue to do so until the site is completed in six or seven years’ time. We appreciate the way in which the SDS team takes responsibility not only for ensuring the delivery of every aspect of their involvement but also for always going the extra mile to help us resolve issues on-site that sit outside of their control.