This strategy would address the prerequisites to achieve planning consent for the airport’s further expansion.

LLAOL embarked on a systematic programme of facilities and services development that ensures the airport complies with all current and anticipated future environmental regulations. This prevents surface water and groundwater pollution in accordance with the objectives of the Luton Local Plan and the National Planning Policy Framework.

Data collected from water quality monitoring conducted at the airport between 2005 and 2012 identified the main pollution risks from the airport as oil spills and de-icing chemicals, for which oil interceptors and first flush drainage systems were considered the most appropriate pollution mitigation assets.

As well as providing storage and flow balancing to deal with contaminated surface water runoff, the airport’s drainage scheme includes methods to manage acute and chronic pollution events and techniques to continuously monitor the quality and quantity of surface water runoff from all points of discharge to either groundwater or surface waters.

The measures adopted are based on sustainable mitigation, which balances environmental, social and economic factors. Hazardous substances are prevented from entering controlled waters, while non-hazardous substances may enter but not cause pollution.

The water resource receptors, into which any contaminated surface water may flow, were identified as Luton Hoo Lake (via a Thames Water surface water sewer) and the River Lea, to which UK/EU Environmental Quality Standards are applied, along with an underlying Principal Chalk aquifer which is monitored against UK Drinking Water Standards for Groundwater.

Phase 1 of the airport’s new development programme includes the resurfacing and expansion of car parking areas, extensions to buildings and the construction of a new dual carriageway.

There was already a known flooding problem that existed on Airport Way, which provides main access to and from the airport. But the main impact of this first phase of development was the increased risk of flooding caused by multiple new impermeable areas, mainly due to a new road layout and the construction of a second carriageway. The removal of pre-existing soakaways, installation of additional piping and the diversion of manholes required that a new SuDS system should not only prevent the increased risk of flooding, but also protect habitat and amenity by improving water quality. 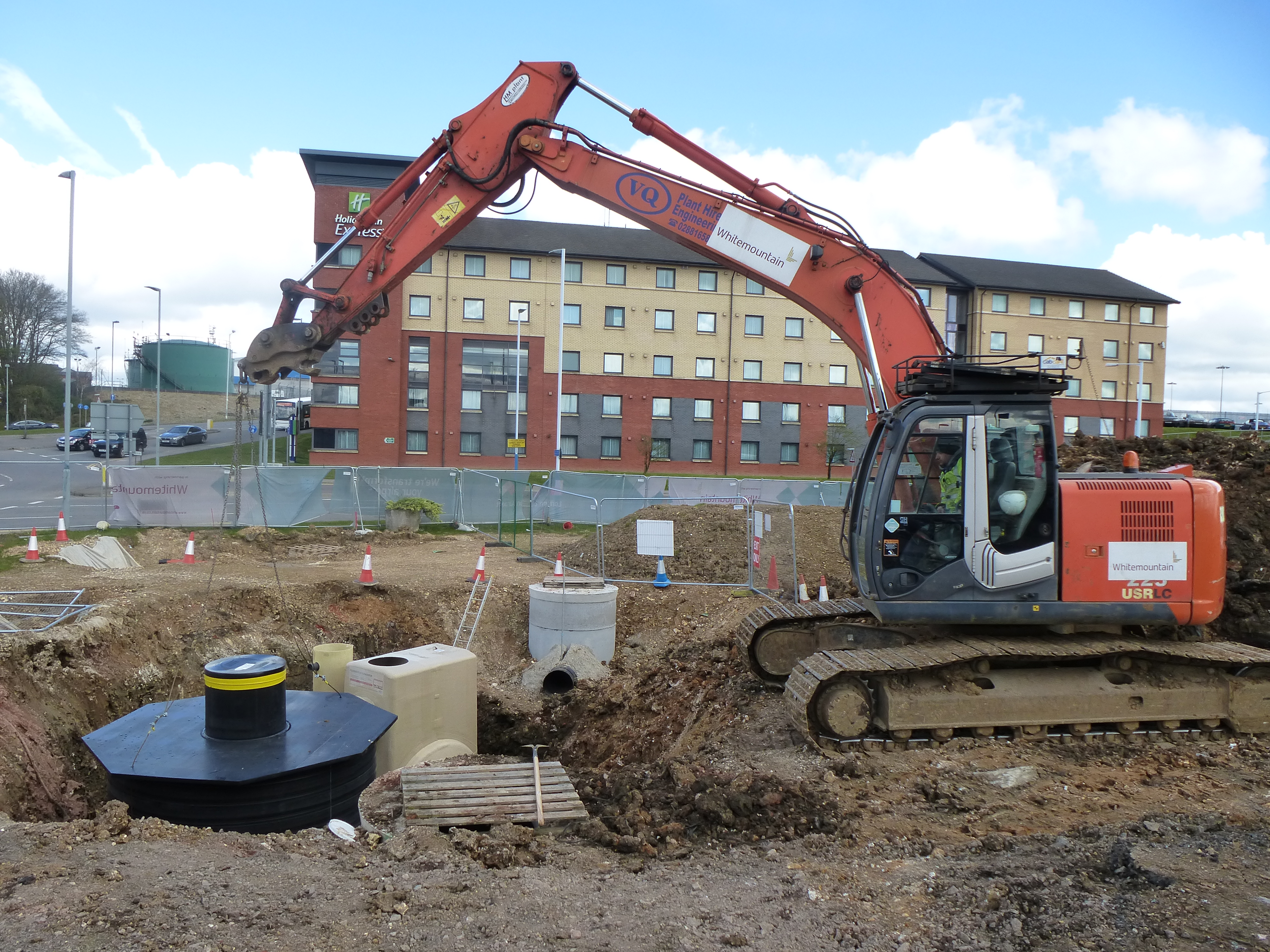 The five SDS GEOlight® attenuation tanks have the combined capacity to store up to 4,277 cubic metres of water, which has been first cleansed by each of two SDS Aqua-Swirl™ hydrodynamic vortex separators. These are designed to remove approximately 90 to 95% of the total pollutants in the surface water runoff volume.

The airport’s underground storage facility landside has sufficient capacity to accommodate excess airside surface water runoff, the first flush of which will be highly contaminated with substances such as de-icing chemicals and wll be diverted to the Thames Water foul system for treatment. While airside and landside runoff had more typically been considered two entirely separate wastewater streams, LLAOL developed plans to holistically manage all sources of surface water, including the control of their dispersal in the most environmentally friendly and ecologically conscious way.

The new system has been designed to series 500 of the specification for highways works and sewers for adoption and follows engineering consultancy Mott MacDonald’s flood risk design for a 1:100-year storm event, including an allowance for an additional 20% due to climate change. Surface water drainage is managed in accordance with the ‘Design Manual for Roads and Bridges’ (‘DMRB’), the ‘Manual of Contract Documents for Highways Works’ (‘MCHW’) and ‘Sewers for Adoption Seventh Edition’.

As well as providing the site with essential control over water quality, of particular benefit to the infrastructure drainage contractor, Whitemountain, is the robust build and light weight of the SDS Aqua-Swirl™ treatment device. This can be lifted and manoeuvred easily into position by an excavation plant that might already be in use on site and without the need for heavy machinery.

An additional benefit of the SuDS system is the reduction, to a great extent, in the frequency and volume of the flooding that occurred in the neighbouring Airport Way underpass. While the flooding hazard for both carriageways continues to remain categorised as ‘significant’ for a 1 in 100-year storm event, the severity of flooding across the access route in a 30-year event has been reduced to the category of ‘moderate’ for one carriageway. For a 1 in 10-year event, the second carriageway has been deemed entirely clear. Furthermore, for all return periods, the hazard remains in place for a maximum of only two hours, which significantly reduces the duration of restricted access. The installation of a pump, which can transfer flows to the SDS GEOlight® tanks, ensures that emergency access can still be gained at all times.

The installation of a system comprising a device of concrete construction, until now our only option, would have required the use of a 350 tonne crane and most likely, due to the massive inconvenience not just to us but to the airport and local road network, would not have been feasible at all. The Aqua-Swirl™’s versatility meant that we could design the devices for the specific requirements of this site, without the need for any bends in piping, whilst their inherent strength allowed us to save on time and cost through not requiring a concrete surround. Their compact size and small footprint, together with the lifting supports and straps provided, meant installation was very quick and simple and final placement could be done manually; we needed only a single day in which to dig, position, connect up and back fill. 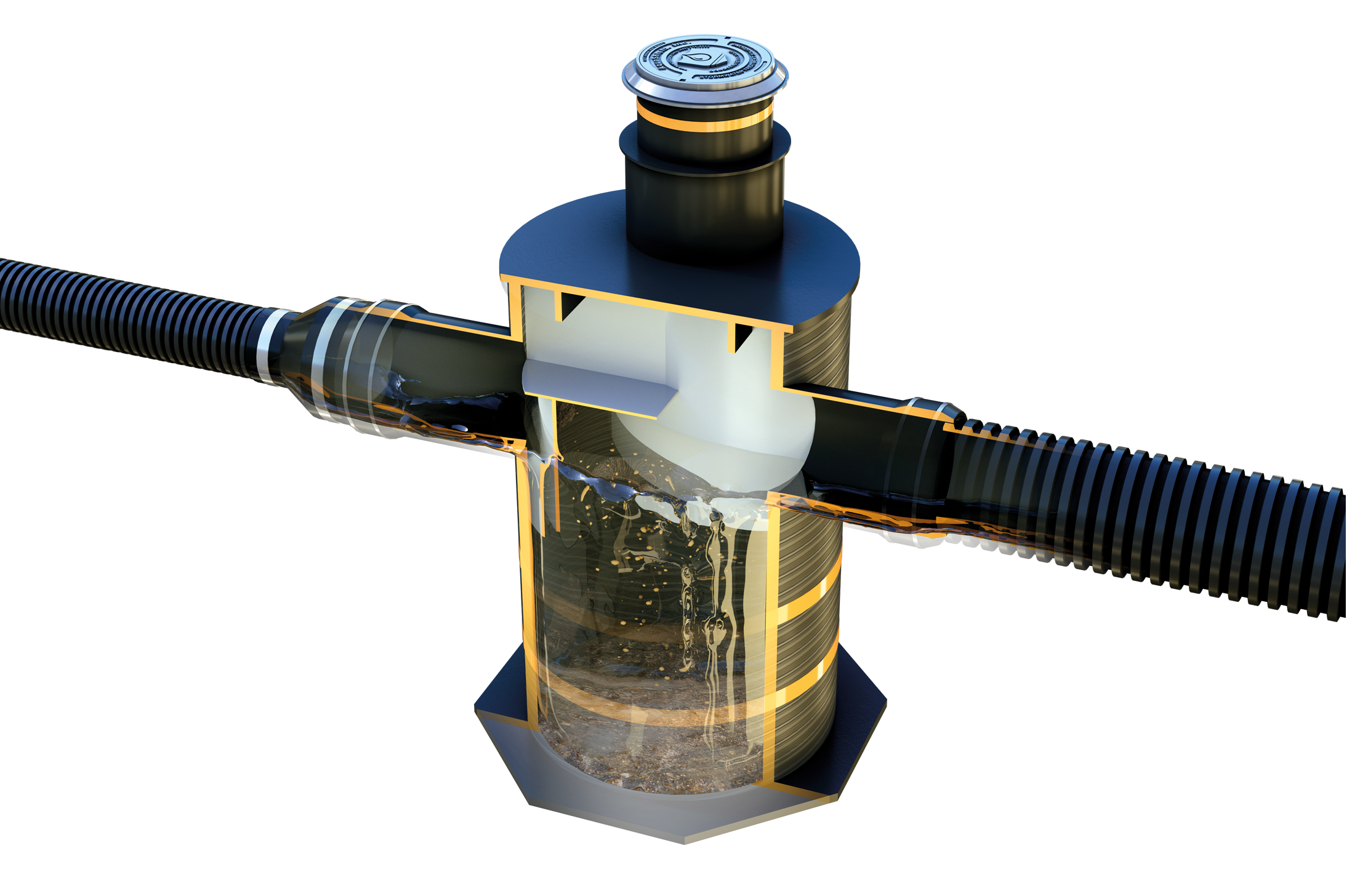 SDS Aqua-Swirl™ is a custom engineered, flow through water quality device that utilises hydrodynamic separation technology to maximise the removal of sediment, debris and free floating oil within surface water run off.

The treatment flow rate of the SDS Aqua-Swirl™ system is engineered to meet or exceed the local water quality treatment criteria and form and intrinsic part of the SuDS solution train.

When connected to a SDS SYMBiotIC™ system, SDS Aqua-Swirl™ provides real time data on a broad range of key operating factors such as pollutant loads and silt capture level.